Bitcoin’s reported market dominance is approaching 70%, but in reality it is above 90% 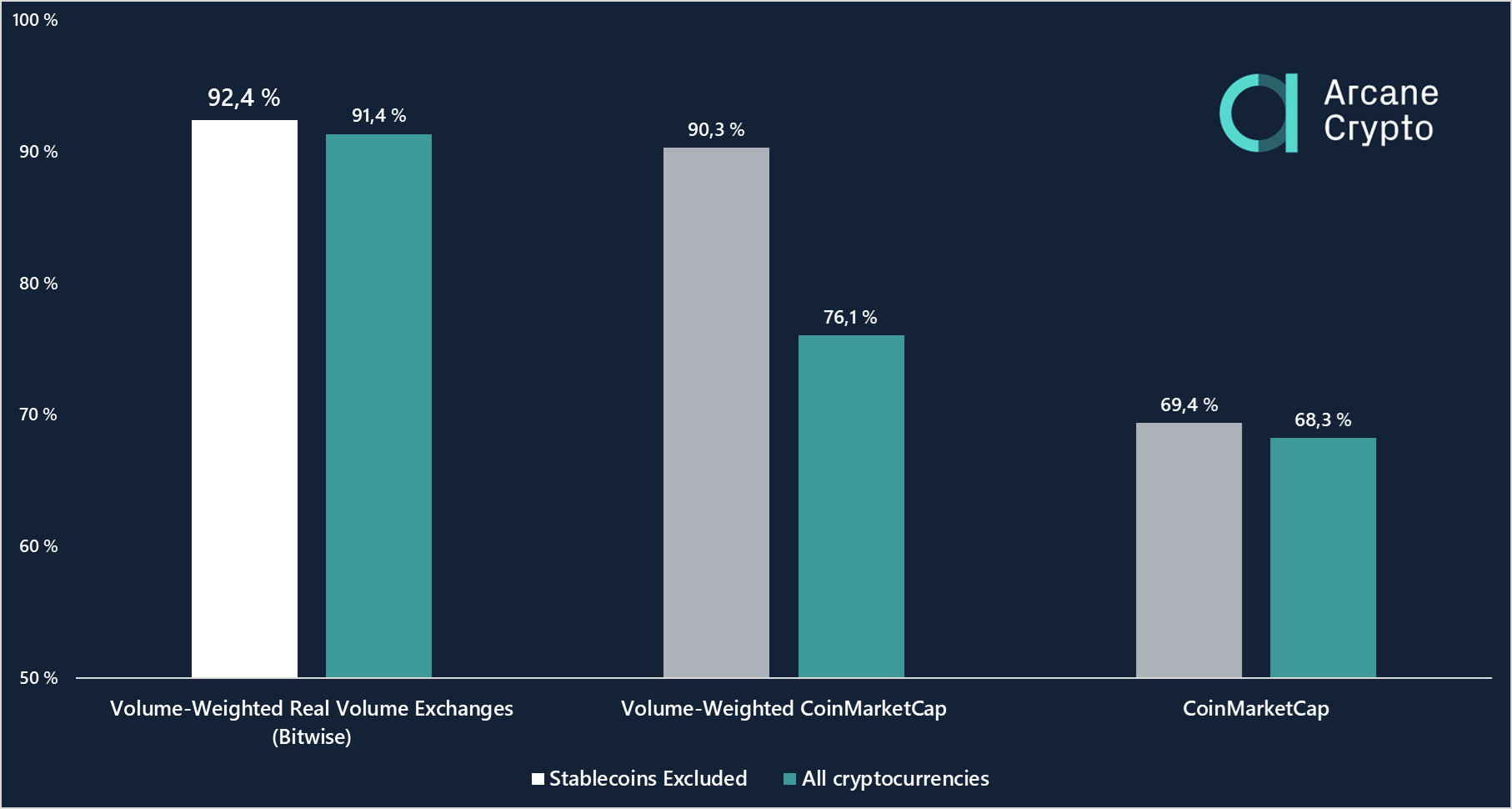 By many this is used as a measure of the relative strength of different cryptocurrencies and blockchain projects.

Success does not imply high valuation

Using the price and market valuation as signal of strength is of course a weak proxy. Price is far from everything and many projects might be hugely successful without the token capturing a large market capitalization.

This is typically the case for transactional utility tokes which might facilitate a massive turnover without ever appreciating much, as the velocity of the tokens can be very high without “hodl-demand”. Furthermore, for many projects the price contains more noise than signal as both the projects and the market is too immature.

High valuation is an indication of success

That said, price development and valuation is far from irrelevant. Having an appreciating and valuable token is generally a good sign for a project, and in that regard Bitcoin is by far the king of crypto, with a reported market dominance approaching 70%. However, this measure is deeply flawed and actually underestimates the relative strength of Bitcoin in terms of relative valuation.

The problem is that the calculation does not take liquidity into account. One might be able to sell one token for 3 dollars, but what happens if you want to sell 1 million? Without accounting for liquidity, market capitalization becomes a meaningless measure.

Measuring liquidity is not straight forward, and ideally one would create some combined measure of slippage, how much the price moves when you execute a large order, and spread, the difference between bid and ask prices. Large slippage and a wide spread would indicate low liquidity, which is the case for many coins and tokens.

A simpler measure of liquidity, commonly used as a proxy, is trading volume. Using this to adjust the relative market capitalization, we get a more meaningful measure of the relative strength of the different coins and tokens.

Bitcoin more liquid than other coins

As is shown in the table below, adjusting for liquidity by calculating the volume-weighted market capitalization, bitcoin’s market dominance is pushed well above 90%.

This is true whether we use the volumes as recorded on CoinMarketCap, excluding stable coins, which are representations of other assets rather than “true” cryptocurrencies, or only look at the 10 exchanges identified by Bitwise as those having “real” (not wash trade) volume.

Tokenized assets should be excluded

By excluding stablecoins from the calculation, we get a more precise measurement of the relative strength of different cryptocurrencies and blockchain projects. These stablecoins are pegged to other assets (dollar deposits), and does not compete with other tradeable cryptocurrencies with self sustaining “intrinsic” value.

If Apple shares was tokenized, it wouldn’t be meaningful to add its capitalization to that of crypto. There are of course edge cases that are less clear such as Dai, the stablecoin, and Maker, the control tokens of the DAO. Still, these are too small at the moment to really make a quantitative difference.

Bitcoin is best positioned to become the money of the internet

It is notoriously difficult to compare and contrast different projects targeting different niches. Every quantitative measure will at best be a proxy and always brush over important qualitative differences. For crypto, one could argue that the whole idea of measuring the relative strength of different coins and tokens falsely implies a competition between complementary solutions.

Still, history has shown us that network effects often trump specialisation. General platforms with wide adoption might be used for “everything”, like the internet. Nowhere are the network effects stronger than for money, where liquidity is everything.

Every day bitcoin stays ahead, it becomes less likely that any other cryptocurrency can compete as a money. That is important to understand not only for investors and those building out payment infrastructure, but also those building out solutions leveraging the security of a public blockchain. The value of bitcoin as is what makes its blockchain the most secure and makes users take good care of their private keys.